“People with AF are five times more likely to have a stroke.”

“In the UK, more than one million people have Atrial Fibrillation.”

“Atrial Fibrillation is one of the most common forms of abnormal heart rhythm (arrhythmia) and a major cause of stroke.”

Every heartbeat is immediately preceded by a small electrical impulse which travels through the heart along a network of nerves called the Cardiac Conduction System.

Each electrical impulse starts high up in the Right Atrium in a region know as the Sinoatrial Node (SA Node). It then travels across the top two heart chambers (the Atria) causing them to contract simultaneously, before reaching the mid-point between the top and bottom chambers, a region known as the Atrioventricular Node (AV Node). Here, there is a short delay as the electrical impulse travels slower through the AV Node.

Once through, the electrical impulse travels fast along nerve fibres within the muscular walls of the ventricles causing them to contract simultaneously.

After a short recharge time, another electrical impulse starts following the same pathway.

A normal heart rate at rest (i.e. after sitting or lying down for 10-15mins) is typically between 60 – 100 beats per minute. If slower than this you have Bradycardia, something commonly seen in very active people. However even with top athletes it is abnormal to have a resting heart rate less than 40 beats per minute.

A heart rate above 100 beats per minute is described as Tachycardia. 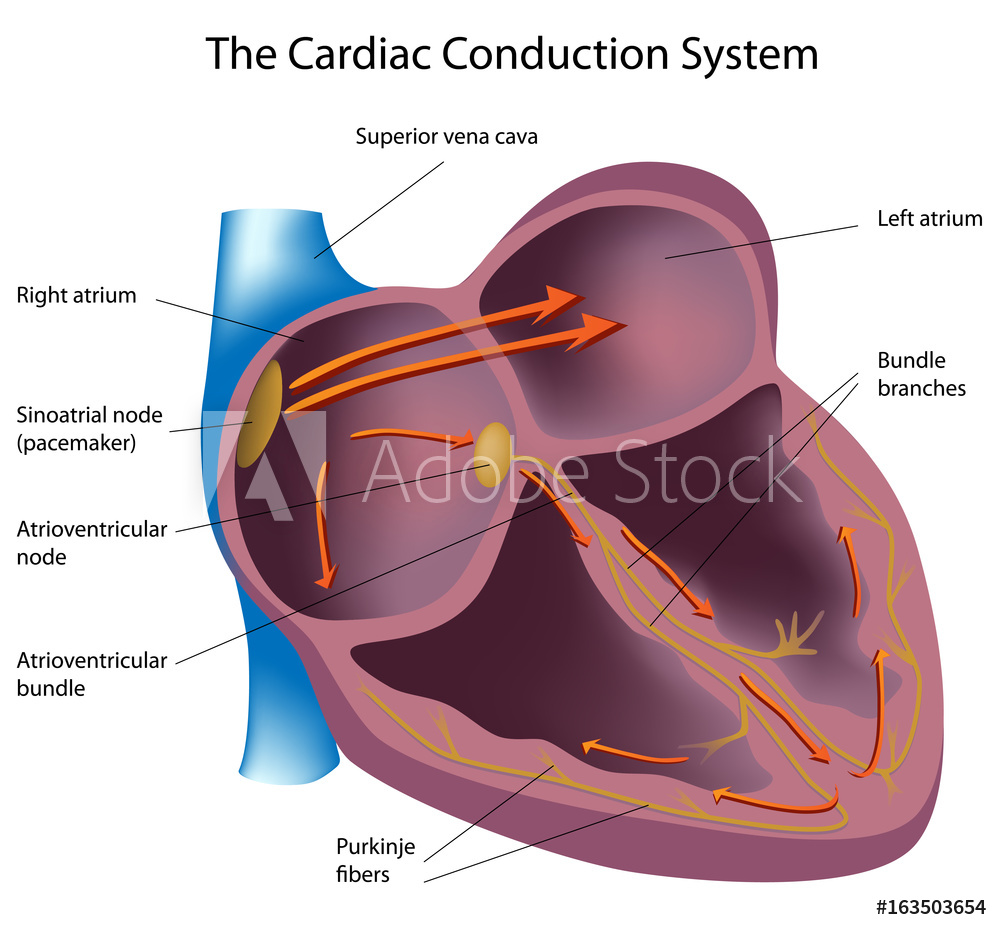 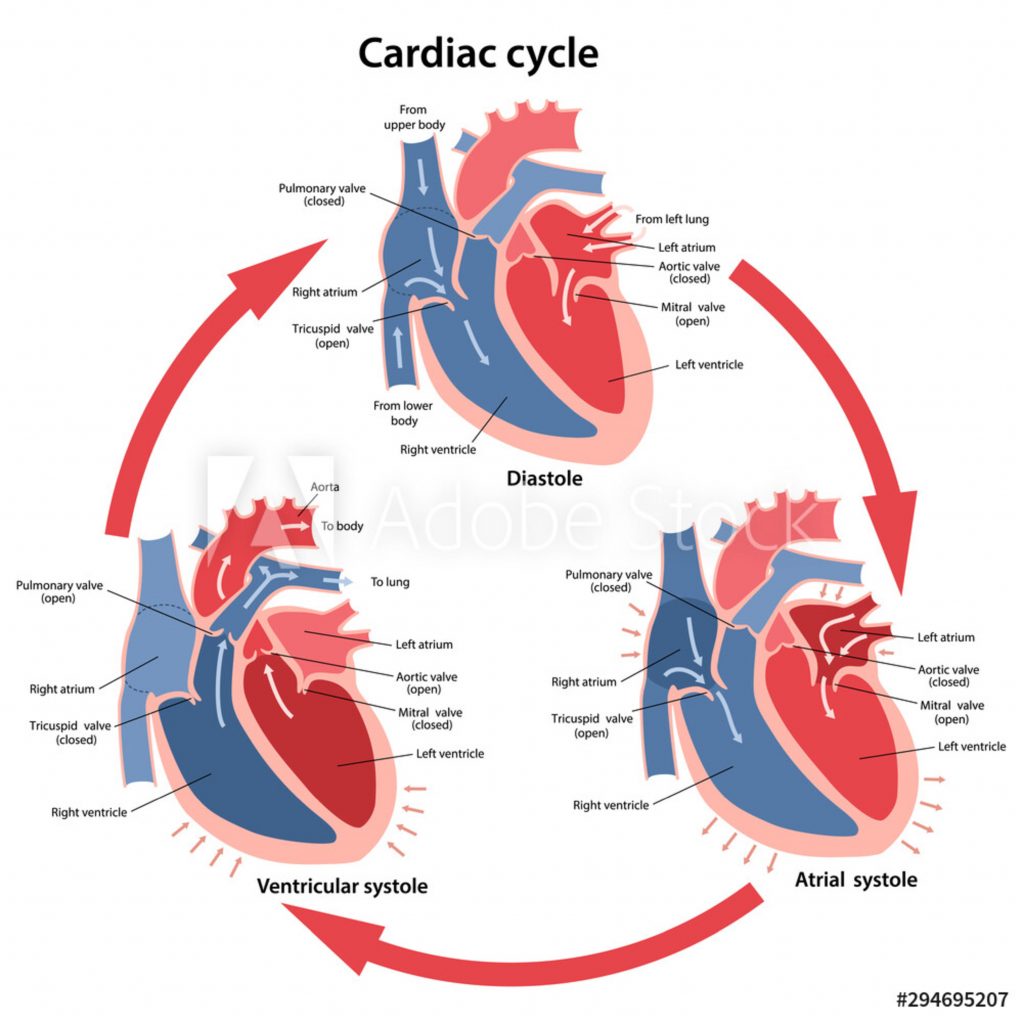 Blood flow through a Cardiac Cycle

So how do these electrical impulses relate to the pumping function of the heart and blood flow?

The heart works most efficiently when it is working in a normal Sinus rhythm. Sometimes however it can miss a beat or have a beat occur sooner than expected – people often describe these as Palpitations (if they feel them).

Atrial Fibrillation (AF or AFib) is a very different arrhythmia. This occurs when an increased number of electrical impulses fire off from different areas in the top chambers of the heart (the Atria) in a random and disorganised way. These irregular impulses cause both the right and left atria to quiver instead of contracting uniformly as in normal sinus rhythm.

Unfortunately, many people are completely unaware they are experiencing this arrhythmia until it is detected at a routine health check or they experience a sudden unexpected adverse event such as a Stroke or Heart attack. 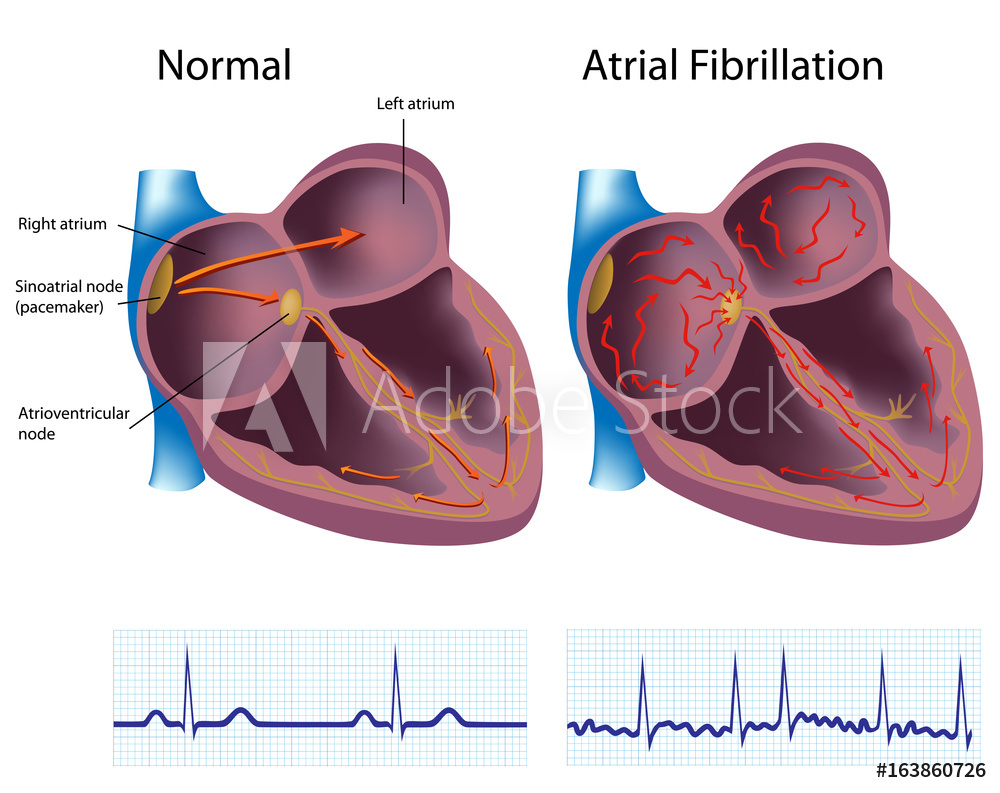 The cause of Atrial Fibrillation is often unknown, however its more likely to occur as we get older and more common in people with other heart conditions such as hypertension (high blood pressure), coronary artery disease or previous heart surgery. 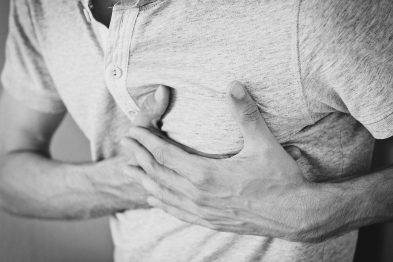 If these blood clots dislodge and travel into the ventricles, they can be pumped out of the heart leading to killer consequences;

1) Stroke – The most common and serious complication of Atrial Fibrillation is a stroke. This is where a blood clot cuts off the blood supply to a part of the brain, damaging brain cells due to a lack of oxygen. A stroke can lead to brain injury, disability or possibly death.

2) Heart Attack – If a blood clot travels down one of the blood vessels supplying the heart muscle (coronary arteries), this can cause a heart attack by blocking the blood supply to an area of heart muscle, starving the muscle of oxygen and causing it to slowly die.

Other consequences of Atrial Fibrillation

When should I go see my doctor?

If you have any concerns about your heart rate, heart rhythm or general health, please consult with your local family doctor.

Active Heart Health aims to alert you to potential silent killers which would need to be investigated further by your family doctor or cardiologist. 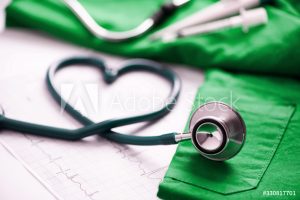